This beauty is brought to us by Brian Hill, author of "On the Ropes," a column feature of "Not So Modern Drummer" and comes in at 14"(h) by 16.5" (dia.).  Hill attributes the drum to Abner Stevens of Pittsfield, Massachusetts. 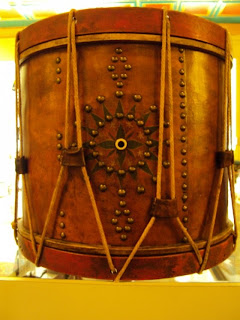 Many drums offer a collector a good deal of the unknown in what is mostly left unsaid, but some drums will present a good mystery with what is said.  For my money, solving a good mystery is one of the most rewarding aspects of collecting historical antiques.  This drum is a great example of that as well as the fancy, eloquent style found during the militia period of the late Federal and early Antebellum eras.  Abner Stevens, along with other notable drum makers and craftsman of the time such as the Browns and Porter Blanchard, were well known for their craftsmanship and style in drum building.

Stevens drums are very notable for the ornate tack designs and artistic paintings found on their shells.  Early in 1809, Abner Stevens moved his drum making business from Hancock, MA, to Pittsfield, MA, building his new shop on North Street.  He profited immensely from the business brought to him by the U. S. Government via the War of 1812 as well as the popularity of the new militia movement which resulted mainly due to the effects of the War and continued hostility from Native Peoples.
The drum shell is made of a single ply of maple that has what appears to be a sponge-applied brown stain that gives the warm appearance of leather.  A thick hand-carved ivory vent hole is the center of an extraordinary paint and tack design consisting of a green, red, and gold painted flower and starburst design with two sizes of brass tacks forming circles and diamonds within a vertical tack border.  The maple counter hoops retain about 90% of the original red-sponged paint.  Small leather ears, ”sash” rope, gut snares, hoops and skins appear to be original or from the Civil War period.  There are three thick, gut snares that are held in place by being tucked under the counter hoops as there is no snare butt, gates, or mechanical snare adjuster present.
Inside the drum the paper label is in fairly good shape and identifies Abner Stevens, of Pittsfield Mass. as the maker and contains the printed date 1811, as was his practice to date the drums he made.  There is no player identification attached to this drum, but I think the last person to use this instrument was a fairly good player as is indicated by the small, distinct strike pattern in the center of the batter head.  However, there is a “unit” identification.  Written neatly in pen on a small paper label affixed to the original maker’s label is:  “44th. Reg.”  This is one of those mystery clues I often speak of that present more questions than answers.  With no state of origin or any other obvious clues present, it’s hard to know what this means without looking very close and doing a little speculating. 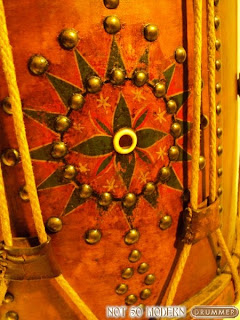 The first and most obvious clue is the fantastic condition of this 200 year old drum that is suggesting use during the Civil War.  The second clue that stands out to me is the regiment number:  44.  Not all states at the time of the War could produce that many regiments, so that should narrow the field.  The third clue that helped was that the drum came from a Connecticut estate, which is in close proximity to the maker’s location.


I researched the histories of every Civil War unit that held the designation number 44.  That in itself eliminated artillery and cavalry units and most things Confederate.  One regiment stood out to me:  The 44th Mass.  Not only was this regiment from New England, but it only served a nine month enlistment and had a relatively easy time.  The 44th Massachusetts Volunteer Militia Infantry, aka New England Guards Regiment, was one of the new militia units raised to fill the quota of Mass. under the call of Aug. 4, 1862, for nine months troops.  They were mustered in and out of the Army at Readville, Ma, enlisting in service from September 12, 1862 to June 18, 1863 with their tour of duty taking place in North Carolina.  The 44th would see action in two minor engagements with Confederate forces which resulted in light casualties, and one retreat.  The remainder of the tour was spent in foraging, garrison duty, serving as provost guard, and destroying Southern fortifications.  Under these circumstances I think that I can speculate that this drum could most definitely have survived a relatively easy nine month enlistment in what was probably the 44th Massachusetts Volunteer Militia Infantry Regiment, aka “44th Reg.” 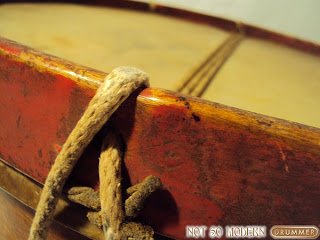 Whether or not I’ve been able to uncover the true identity of the “44th. Reg.” and solving this mystery, I think I’ve got a pretty good contender for the title.  Service during the War of 1812 and subsequent militia service is also not out of the question, but purely speculative in nature.  What I do know is that in Abner Stevens I have a great drum with a great history by one of the best drum makers of the 19th century.  During my research I stumbled upon “The History of Pittsfield Mass.  From the year 1800 to 1876,” by J. E. A. Smith.  Smith writes that “Mr. Stevens made a good rattling instrument”……and that “Under the perpetual incitement of the martial music of his own manufacture, he was of course an ardent war Democrat.”   Abner Stevens died on February 6, 1842 in Pittsfield and will be remembered as a great artisan craftsman in the field of drum building.  By virtue of the era in American History that he practiced his craft, most of his drums were made specifically for the armed forces of the day, making them true Drums of WAR!
From Lancaster County, PA
Thoughts from the shop…………….
Brian Hill
brisoundperc@yahoo.com
at July 06, 2012 No comments: