"One hundred and fifty years of music publishing in the United States; an historical sketch with special reference to the pioneer publisher, Oliver Ditson company, inc., 1783-1933"

"To combine the selling of music with books was natural, but the curious combination of music and umbrellas seems peculiar to Boston in the period 1825- 1845. John Ashton, Jr., and John Ashton & Co. (E. H. Wade) umbrella-makers, from 1 820-1 843 at 18 Marlboro Street and 197 Washington Street, may have set the fashion of adding music and musical in- struments to their stock in trade, a step they took in 1825. They were followed by Frederick Lane, the umbrella-man of Court Street, 1821-1837; Henry Prentiss who, having been an umbrella-maker from 1825 to 1833 on Court Street, added pianos and music in 1834 and published music as well until 1845; and Charles H. Keith, another Court Street umbrella- maker from 1833, who added music and instruments to his stock in 1835, in 1840 took in a partner for two years as Keith & Moore, and as music-dealer and publisher under his own name continued until 1 846, when the catalog was purchased by Oliver Ditson & Co. A shorter-lived umbrella and music-store was that of a former partner of John Ashton, Eben H. Wade, who, at 197 Washington Street, did some publishing between 1847 and 1856." 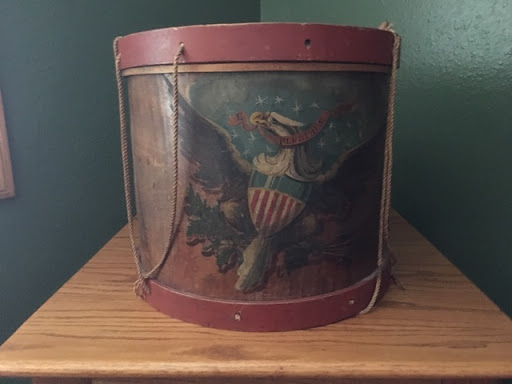 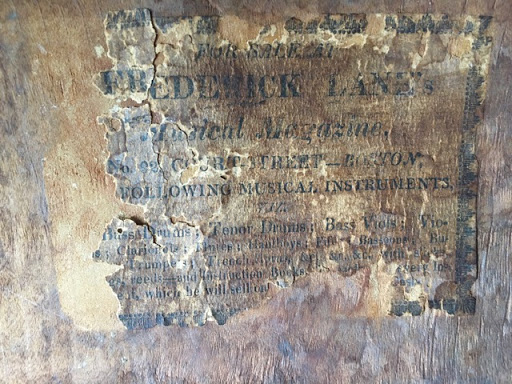 [missing], which we will sell on [missing] 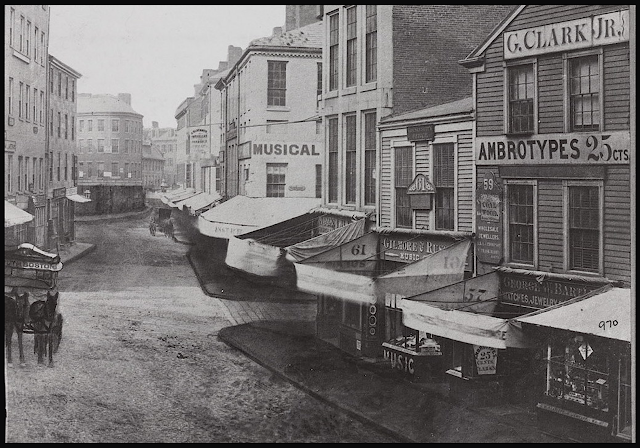 "Frederick Lane's Music Store was at 92 Court St. (opposite of the Old Court House) from 1820-44. He had bought out N. H. Henchman's Music Shop at 79 State St. in April 1813. He manufactured bass drums for the militia, wind instruments and violins. By the 1830, he also made umbrellas at his shop on Court St. 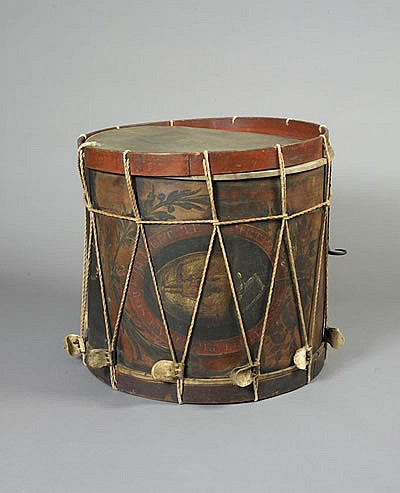 Painted with a view of Massassoit beneath a raised arm brandishing a sword, encircled by a red banner inscribed with the state motto "ENSE PETIT PLACIDEN SUB LIBERTATE QUIETEM (With the Sword We Seek Peace, But Only Under Liberty), within berried laurel branches, the shell painted with red and dark-blue stripes edged in mustard, with the original skins, ropes, hoops and iron strap hook mounted on an iron plate, the interior bearing a partial paper label inscribed "Frederick Lane Keeps Constantly For Sale at His Music Store at No. 79 State Street, Boston, Bassoons with Trumpets, Bird Organs, Tenor Violins...." Height 22 1/2 inches, diameter 24 inches. 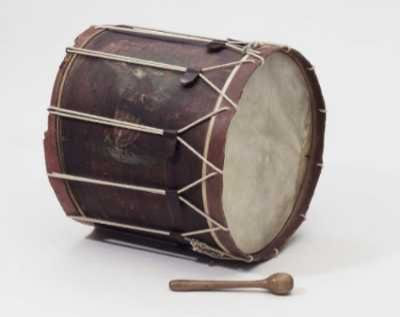 On view in the: Musical Instruments Gallery

Ash (?) shell with painted decoration consisting of an American eagle with "E Pluribus Unum" on a fluttering banner over a shield. Skin heads held on by red-painted wood hoops laced with rope and leather tensioners. Includes old wooden mallet.

Provenance/Ownership History: Donated by Charles E. Black of Hingham, Massachusetts. Black apparently inherited the instrument from his father, Clarence Edgar Black, originally from Waldoboro, Maine. It was supposedly handed down through several generations of the family, and is believed to have been used in the War of 1812 by Joseph Jewett (1780-1852) of Alna, Maine.

This object is included in the following Selected Tour(s):
•Percussion Musical Instruments

Massachusetts Collection of Martial Musick;: Containing a Plain, Easy, and Concise Introduction to the Grounds of Martial Musick, Laid Down in the Most Comprehensive Manner. : Together with a Large Collection of the Most Approved Beats, Marches, Airs, &c.; Including the Principal Part of the Duties of the Camp, the Evolutions for the Musicians, and Their Signals; a Great Part of which was Never Before Published. Designed Principally for the Benefit of the Militia of the United States

Alvan Robinson
Glazier and Company; sold by them, wholesale and retail, at their bookstore, no. 1, Kennebec-Row; by Frederick Lane, at his music-store, no. 92, Court-street, Boston; and by the booksellers generally., 1826 - Drum - 71 pages
https://books.google.com/books/about/Massachusetts_Collection_of_Martial_Musi.html?id=o-gHGwAACAAJ
at August 29, 2020 No comments: