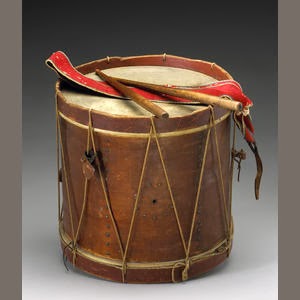 The interior with paper label reading:

Massachusetts Drums
Made and Sold by
Chandler & Peabody
Marlborough Street-Salem

Provenance: By family descent to the present owner.

Note: The 21st Maine Infantry was a nine month regiment enlisted in November of 1862. They were active in the Port Hudson campaign and suffered considerable losses, mainly due to disease. Orestes Porter died on March 8, 1863 and the drum was returned to his family.

Thanks go to VintageDrumGuide.com for posting the following images on its website at http://www.vintagedrumguide.com/nard-j-burns-moore.html. 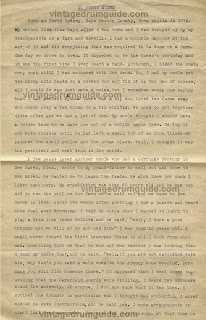 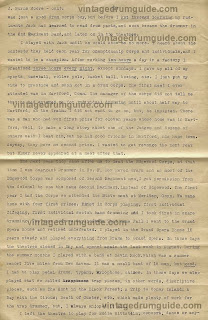 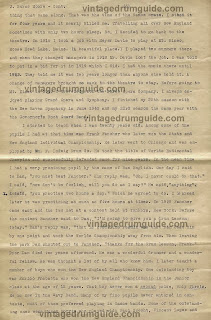 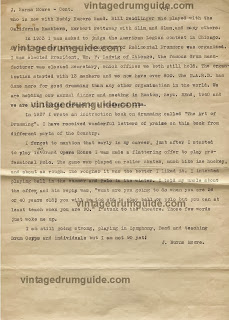 Thanks go to Ed Flack for posting this recording of the great J. Burns Moore on YouTube.

Moore's instruction book, "The Art of Drumming," was my first (and basically only) instruction manual.  My father (Jacob Joseph Mirsky, 1939 NYS VFW Jr. Snare Drum Champion) taught me the long roll, flam, and a few other rudiments, but Moore's book taught me the rest, and all the pieces in the back of the book, including "The Connecticut Halftime."

This article reposted from http://notsomoderndrummer.com/brian-hill/on-the-ropes/the-cost-of-war.html

THE COST OF WAR!
Originally published 10/31/12 by Brian Hill
William S. Tompkins was not just any drum maker, but an incredible craftsman in general. He worked on the cutting edge of the technology available in the then burgeoning martial state that was the 1850's and 1860's. It is thought that he was born around 1812 and served in the Mexican War, possibly in his 30's. Exactly when he started making drums is a matter of speculation. His drums are very well made and virtual works of art that are fairly hard to find. Most of Tompkins drums have very innate designs of inlaid wood placed directly in the shells outer ply of (usually) mahogany. However, there seems to be a very limited supply of Tompkins drums that have been ornately painted rather than adorned with inlays. As of this writing, I only know of two....this is one of those two rare drums. 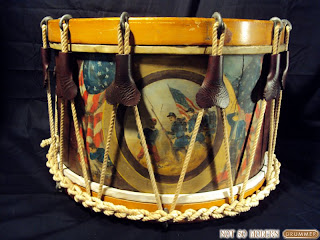 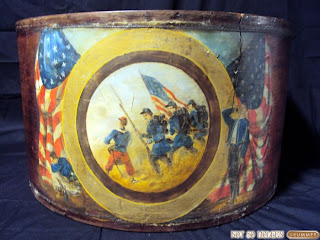 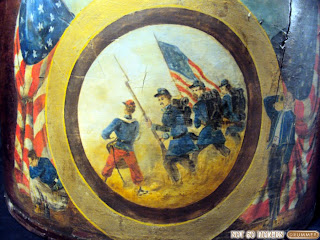 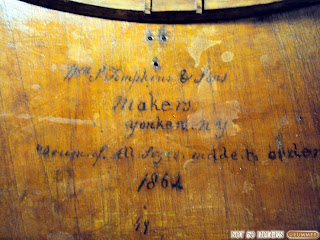 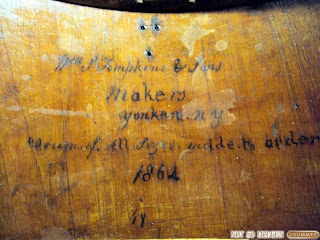 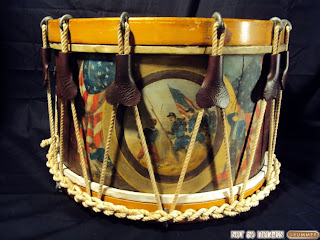 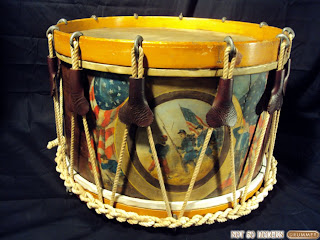 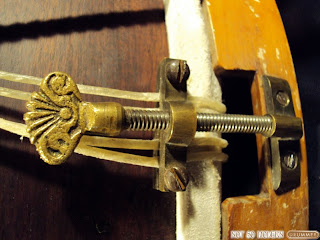 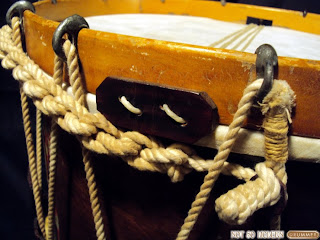 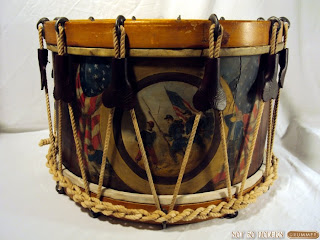 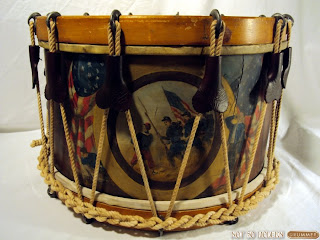 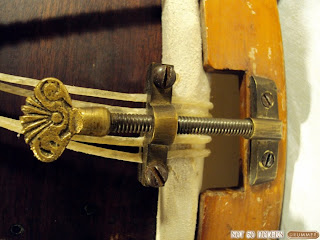 Both of the painted Tompkins drums have striking similarities that could indicate the same painter. The painting on this drum is centered on a large gilded circle that encases a Civil War Union Infantry battle-line charging the enemy with drums beating, flags waving and bombs bursting in a golden field of grass. Picturing three separate but related scenes shrouded in the National Colors, the drum appears to be telling a story, reading from right-to-left when looking directly at the front of the shell.


In the first scene, a soldier sounds the "Charge" on his bugle dressed in a "Chasseur-style" uniform while holding his musket at rest with bayonet fixed. The second scene of the story is the battle scene complete with a drummer with musician's sword, dressed in the classic Vouave uniform sporting the red baggy trousers, made famous by French Legionnaires, found early in the War. The third and final scene is perhaps the most defining and telling of the three. It depicts a soldier sitting on a crate with his head held in his hands, mourning. Beside the soldier is what appears to be a whiskey bottle. Painted on this soldiers rear pants pocket are the initials: "CRR." This is probably the cartouche of the artist who painted the drum.
The story seems to be telling the familiar theme that was a stark reality to the people affected by the on-going struggle that started out as what was thought to be a 3-month affair, but turned out to be a never-ending nightmare of loss and destruction. With the debacle of First Bull Run, in July of 1861 and the battle of Shiloh in April 1862, early illusions of a fast and bloodless war, faded away as the nature what the War would be became apparent. This war would cost more than anyone first imagined when first encouraged by the war fever of the time. Reality was beginning to set in and this drum seems to be a reflection of cost of that reality as the war dragged on. Civil War era paintings of battle-lines on the drum shells are extremely rare and are only usually found in museums.
The paint on this drum, and for that matter the paint on the other "painted" Tompkins drum, seem to be of the era of the War as is with the opinions solicited from experts in the field. The drum could have been made for a militia group or a private purchase for a Union drummer possibly stationed in the Washington D.C. or Baltimore area. Some schools of thought seem to think that regulations on items such as drum motifs may have been somewhat relaxed in these locations. All main areas of this drum seem to be original to mid-to-late 1862.
William Tompkins liked to incorporate the latest innovations into his drum making. He was quick to adopt iron rope hooks instead of drilling holes in the counter hoops and running the cord through them to tighten the heads. He also seemed inclined to use the "screw-type" snare adjuster as opposed to the older "clam-style" adjuster. His shell design was also cutting-edge as he bent what appears to be a main ply of stained maple with the grain running vertically and "butt-seamed" together, overlapped with a thin ply of mahogany veneer running horizontally and secured so closely that the seam is all but detectable. Running the grain vertically on the inside of the shell will help to create more low-end fundamental tones that will compensate for the relative shallowness of the ten inch depth of the shell. The outer ply, along with the hand-carved glue rings located top and bottom on the inside of the shell, reinforce the inner/main ply of the drum. Tompkins would also use the outer ply of wood to inset the intricate hand carved pieces of wood to create his impressive inlay designs. The vent hole is reinforced with a hand carved bone grommet. The maple counter hoops are 1 3/8" high with some of the best and smoothest scarf joints I have ever seen. There are two hand-cut rectangular snare gates in the lower counter hoop measuring approximately 1 ¾" in length to allow the four gut snares to pass freely through.
Tompkins drums are not known for paper labels on the inside of the shell. Instead, Tompkins hand wrote his "label" in pen. His practice was also to date and number them: this drum is numbered "49" and dated "1862." Many of the drums that I have seen of a later date also include the month and day of manufacture. The hand written label reads: "Wm. S. Tompkins & Sons, Makers, Yonkers, NY, "Drum of All Sizes Made To Order" 1862, 49" Also hand written in pencil is an old repair notation: "Werner Soistman, Drums of All Sizes, Made to Order Repairs & All Trimmings High Grade, Bands Furnished With Every ___?__ Banjos, Tambourines At 241 N. 2nd Phila. PA." Werner and John Soistman formed the firm "Soistman & Brothers" in 1887. Werner, along with his two brothers, Jos. and Ernest, succeeded their father Louis Soistman who died in January, 1886, in the drum making business. The Soistman family was listed as drum makers starting with Conrad and Frederick (C & F Soistman) in the 1850's and continued until 1975 ending with Charles (Buck) Soistman (son of Charles A.), comprising separate firms from time-to-time. This notation was more than likely for a repair that Werner performed on the drum in Philadelphia during the mid-1880's to the mid-1890s. Werner kept this address until 1895. The batter (top) skin may be original to this repair and has the Jos. Rogers, Jr. stamp.
The rope has been replaced along with the 12 leather ears, bottom hide, leather rope washer, gut snares and leather snare butt. A light cleaning was all that was necessary to bring this drum up to a restored condition. The appeal for a relic in this league would not only find an audience with collectors of antiques and drums, but from those of military and history, as well as folk-art groups. This incredible drum stands as a rare and compelling testament to what was our "Civil" War and the reality of what makes a Drum of WAR!
From Lancaster County PA,
Thoughts from the Shop....
Brian Hill
brisoundperc@yahoo.com

Where do I start?  Rope drum enthusiasts should wander over to Robin Engleman's excellent website covering a multitude of things drum, percussion, music, and life.  Our readers should see, especially, Professor Engelman's articles on fifes and drums.  His treatment of the history of the Downfall ("The Downfall of Paris") is revealing and informative.  What a fabulous resource he has given us.