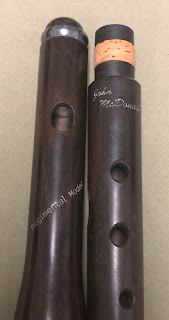 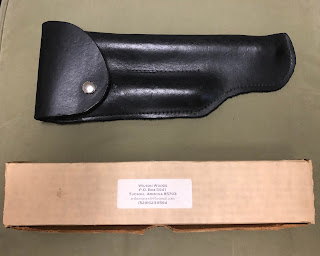 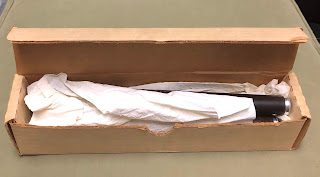 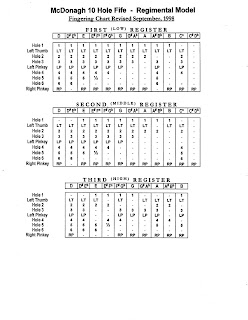 McDonagh Fifes
https://en.wikipedia.org/wiki/Fife_(instrument):EditIn 1958, a new model fife designed by fifer John McDonagh was manufactured in Germany. This model was used by the three corps affiliated with him: The New York Regimentals Fife and Drum Band, St. Benedict's Fife and Drum Corps and St. Anselm's Sr. Fife and Drum Corps. All were located in the Bronx, New York. These fifes were not otherwise available to the public. A short time later a second generation of model evolved, specifically labeled the McDonagh Model and made by Roy Seaman, a music repairman whom John befriended in Manhattan. This model quickly came into popularity. These fifes were mass-produced for sale to the entire fife and drum community. They were two-piece instruments with a dual conical bore – the foot joint tapered down from the joint to about an inch before terminus, where the bore cone reversed itself and opened up again slightly. They used the popular flute and piccolo designs of the 1830s, where "cone" flutes were the rage and most common. The cone flutes had fallen out of favor to the cylindrical flutes designed by Boehm, though fifes and piccolos remained popular among folk music performers.
As would be expected, these fifes were notably more internally in tune than most previous fifes, since the designs of the 1830s fell from favor, and had the added value of being tunable with each other (by sliding the joint or the head cork). In addition, they gave the player greater dynamic control and could be played even louder than traditional fifes, the result of the lower cone in the bore. At first, only six hole (Model J) fifes were made, but by 1960, McDonagh designed and Seaman manufactured a 10-hole (Model L). Two of the holes were used by RH2 – covering only one of the two produced F natural. Some players found this quite difficult, so eventually (c. 1970s), an 11-hole model was introduced, the Model M, with both the original double RH2 holes and an RH thumb hole to choose from for the F natural. These were actually ideas derived from several makers of the days of the 19th century, including Giorgi, even though there was no need for F natural in traditional fife music.
Around this time, Roy Seaman had been deeply involved in the making of piccolos under his name, the body style of which resembled the McDonagh Model fife. Roy decided to retire from actively manufacturing fifes and sold the operation of making McDonagh fifes to an apprentice, Larry Trout. Operating on his own, Trout soon chose to mark the fife with his own "fish" symbol, which replaced the script mark of Roy Seaman's name. In time, the quality of the instrument eventually suffered and other models of fifes began to emerge in the United States.
McDonagh had stayed uninvolved from active fife and drum performance, teaching and composition for many years. As new generations of fifers emerged, John remained reclusive to himself and a few close friends, preferring to stay in his apartment in mid-town Manhattan. That began to change in 1988 and John began to meet privately at his home with some former fifing colleagues and a few newer players. John also renewed his collaborative friendship with Roy Seaman, who was now living in Arizona.
In 1997, John McDonagh, along with a newly formed fife study group, decided that the time had come to make changes to the original 1960 ten-hole fife. A new manufacturer, Wilson Woods, with critical oversight from Roy Seaman once again, produced the new fife, designated the Regimental Model. Along with this new fife, a number of fingering changes were suggested to take full advantage of the improved design. For a number of years, both Larry Trout and Wilson Woods made McDonagh fifes jointly—Trout the fish-marked familiar McDonagh Model and Wilson the Regimental Model. Eventually, both men discontinued making fifes as of 2003.
Most recently, The Cooperman Company, founded by Patrick H Cooperman, took over the manufacture of McDonagh fifes. Cooperman had ventured himself into the concert-fifemaking world in about 1985 with his own version of a two-piece fife, as well as an acoustically correct one-piece version, through the assistance of a few key players. Though the fifes played and sold well, they had not reached the popularity of the McDonagh.
at January 06, 2019 No comments: