"Untouched Original American Drum from the War of 1812 made between 1807 and 1814 by Chandler and Peabody of Salem, Mass.

"16 ½ inches high; 16 ¾ inches in diameter; Rims 1 ½ inches wide. Rims old red paint, wear to top edges between ropes from use. Original rope, heads, snare, four original tighteners. Rope has one break; tighteners are partial and fragile; tear in top head. Bottom head, snare and snare tightener good. Old repair to bottom rim in two places by riveting on iron strips. Old name in ink script on top head that is difficult to make out, but is certainly that of an owner. Tack decorated around vent hole and down overlap. Plain wood body with age and water stains.  Museum accession/inventory number in small letters on bottom head. Untouched condition.

"Vent hole permits reading of horizontally mounted label. Photo taken through the vent hole with light through the heads. I have not taken the drum apart. I would guess the label to be about 5 x 7 inches. Label with decorative border reads: “Massachusetts Drums” over a wonderful early American eagle clutching olive branch and arrows, with a ribband in its beak reading “E Pluribus Unum” and a stylized sunburst overhead. Below the eagle: “MASSACHUSETTS DRUMS, MADE AND SOLD BY CHANDLER & PEABODY, Marlborough Street – SALEM.”

"There are no city directories of Salem for this period, but advertisements in the Salem Gazette give a narrow window for the manufacture and marketing of this drum. The beginning of the partnership of Chandler and Peabody on Marlborough Street likely dates between 1807 and 1812. Advertisements for drums by Oliver Peabody alone on Marlborough Street in Salem date 21 August 1807 and 4 September 1807 (I show one of these.) Advertisements for drums and drum instruction books for sale by Chandler and Peabody and for Chandler and Peabody’s Drum Manufactory on Marlborough Street date 24 April 1812 and 15 May 1812 (I show two of these.) The partnership would have been dissolved by 11 February 1814 when Oliver Peabody died in Salem at age 39 (I show his grave site from find a grave. The Essex Register of 16 February 1814 lists his death in Salem at age 35, which is likely a miscopying of “39.”

"Chandler may have remained in business on his own at that address. Norm Flayderman sold a drum with a Chandler label with a Marlborough Street address (Cat.98, item 699, wrongly cited by Bazelon and McGuinn.) That drum bore a circa 1880 painted inscription that it was "War of 1812" and had been bought in 1812, likely mistaken in actual date.

"Pre-Civil War military drums can seldom be dated. Those few that can are almost always date 1825 or later. Here is the chance to acquire a real War of 1812 war-date drum made no later than 1814. De-accessioned from a New England institution and acquired at public auction." 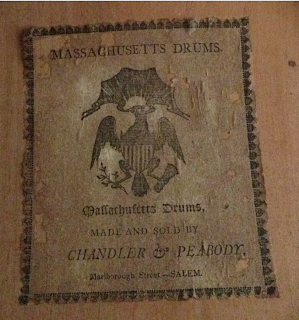 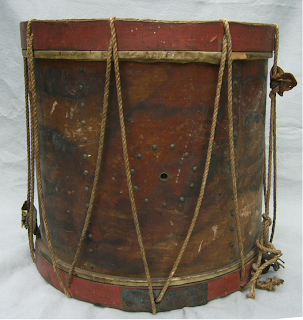 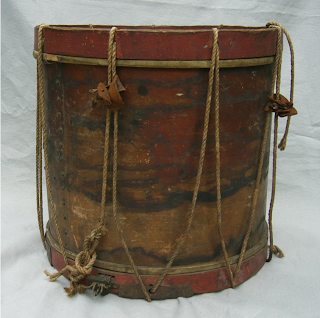 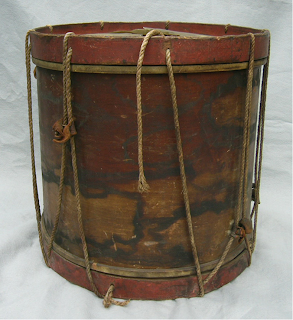 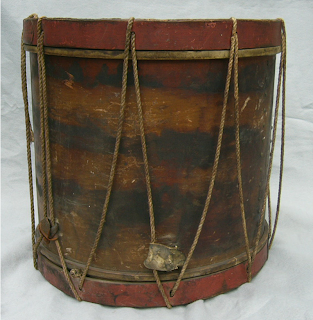 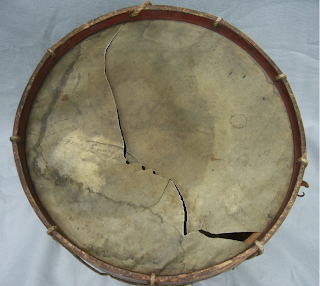 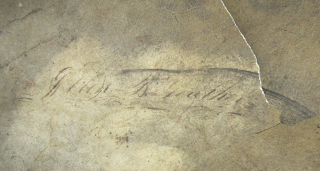 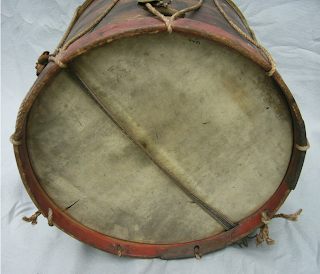 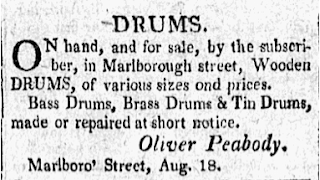 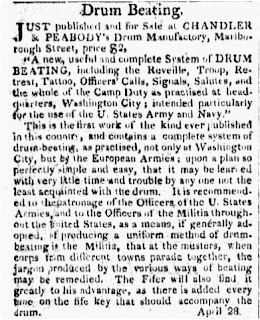 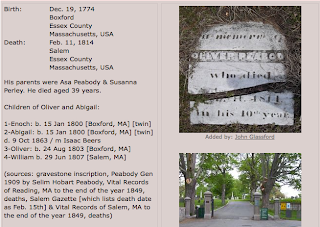 THANKS GO TO: Randolf Davis and Peter Emerick who brought this information to my attention via email.  Peter Emerick adds, "Not as true to the 'untouched 1812' condition the seller would lead you to believe. Interesting snare knot on the anchor side and an obvious updated strainer and gate cut. Nice eagle on the label though, giving an earlier than a [Civil] war contract [drum] perception and a real "federalist period" style. Too bad the roof leaked over its storage location over the years. Real nature art appearance!"  And, of course, to the seller who published the above information to eBay, and to eBay for publishing it to us.
at August 12, 2013 No comments: