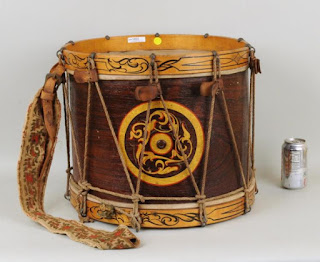 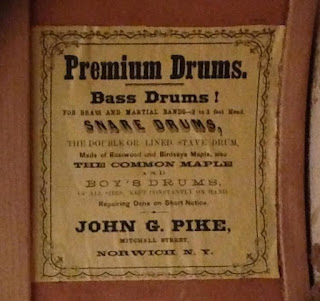 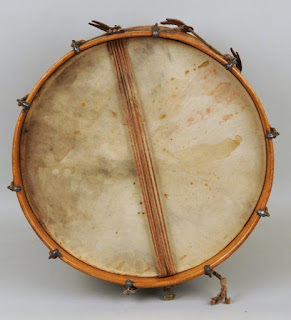 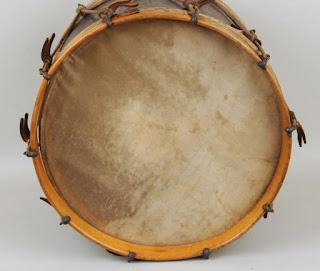 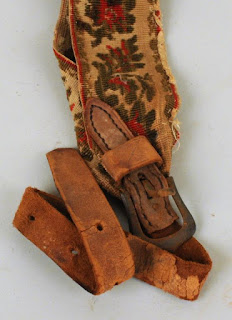 
Description: Remarkable Antique Civil War Drum | This very rare Drum has the original stenciled decoration | The Drum is of folk art militia style and bears manufacturer label of John G. Pike of New York, circa 1860-80 | Drum is made of Rosewood and Birdseye Maple and is in excellent condition for its age | Has original straps | Measures 15″ high and 16 3/4″ diameter | A militia drum labeled by John G. Pike [purportedly] is in the collection of the Metropolitan Museum of Art and is illustrated at page 63 of American Musical Instruments in the Metropolitan Museum of Art, Lawrence Lubin, W.W. Norton & Co, 1985, which states: “John G. Pike made one of the few attributable American drums in the collection (Fig. 43). Inside its shell is Pike’s printed label, listing his stock in trade: Premium Drums. Bass Drums! for brass and martial bands-2 to 3 feet Head. SNARE DRUMS, the double or lined stave drums, Made of Rosewood and Birdseye Maple, also the common maple and Boy’s drums, of all sizes, kept constantly on hand. Repairing Done on Short Notice. JOHN G. PIKE, Mitchell Street, Norwich, N. Y. Pike (b. Plymouth, Chenango County, N.Y., December 23, 1815; d. Norwich, N.Y., July 1, 1884) married Sarah D. Haight of neighboring Smyrna. It was after their fifteen-year-old son’s death in 1853 that the couple moved to Norwich, where they subsequently bought and sold several parcels of land. On November 4, 1854, the Chen­ango Union reported the opening in Norwich of the John A. King & Co. piano factory; Pike, a leading partner, owned the building. The factory did not prosper for long, and by 1867 Pike was pursuing the drum maker’s trade. This occupation was not unrelated to another local industry, the making of cylindrical wooden cheese boxes. New York was the nation’s leading cheese-producing state after 1851, when Jesse Williams established America’s first cheese factory in Rome, Herkimer County, forty-seven miles north of Norwich. Upstate dairies used great quantities of drum-like cheese boxes, and it is probable that more than a few “white coopers” produced drums. At any rate, the front room of Pike’s East Main Street house was furnished as a salesroom, with walls full of drums hung from nails. As late as 1883 the Norwich directory listed Pike as a drum maker, though failing health and poor vision had forced him to curtail manufacture some years earlier. A respected Republican and member of the Congregational church, Pike was known throughout town as an able mechanic. The Mu­seum’s Pike bass drum measures about twenty­-eight inches in diameter, a standard small size convenient for parades. Its mahogany-colored hardwood shell has red hoops, and blue-shaded gold decoration instead of tacks around the air hole. Pike could have purchased ready-made the calfskin or cheaper sheepskin heads he used, as well as the standard Italian hemp cords, tinned iron hooks, and leather “ears,” but the shell and hoops he surely made himself, carefully lapping the joints and reinforcing the laminated, stave­built cylinder with internal ribs at top and bottom. James Robb, drummer of Johnson’s Band in Nor­wich, had a Pike bass drum like this one, which he claimed was the best he ever played.”
Dimensions: 15" x 16.75" x 16.75"
Artist or Maker: John G. Pike
Date: 19th Century

Recorded more than 100 years ago.  Includes Semper Fidelis, Gary Owen, Hell on the Wabash (with modified drum chart presumably to play at speed), and more.

Pretty snappy for their time.

Per Frank Dorritie, "These recordings are remarkable and the playing is state of the art for the context. You may be interested that the bugles used herein are in the Key of F, meaning they are the Cavalry type, or possibly, Regulation G's with the tuning slides pulled out to the F line, though this is less likely given the superb intonation and tone here.

"Also attached a pic of my own fully restored Edison Cylinder Player."
at June 15, 2017 No comments:

"Civil War Eagle Snare Drum of the 78th New York Infantry, 1st Regiment Eagle Brigade, Cameron Highlanders. The regiment left for the "seat of war" in April 1862, and was engaged at Antietam, Chancellorsville and Gettysburg and, later, through heavy fighting in Georgia, being consolidated with the 112th New York in July 1864. The drum is 10" high with a 17" diameter, doubtless being slightly shortened during the period of use, which is not uncommon with the diminutive size of many drummers. Both heads intact, retaining most of the original rope, now broken, and one of the original tighteners, only remnants of the label remain. Brass tack decoration around the air hole, classic painted eagle decoration with the number 78 deeply carved preceding Reg. Original red painted hoops. The drum is in as found/ untouched condition, having surfaced a number of years ago with other artifacts related to this and other New York state regiments. The drum retains about 80% of the original paint decoration, with no imminent signs of further deterioration. Hoops retain 95% of the original red paint with demonstrable wear from the ropes. The drum is accompanied by the original fine condition sticks, with artificially grained decoration, the first example we've seen and the original cloth storage bag, black cotton with gray silk lining, a few holes, but very good and sound." 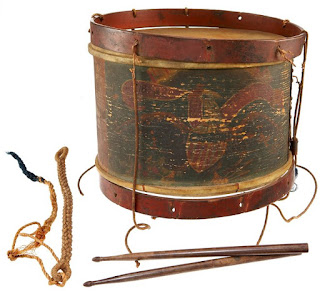 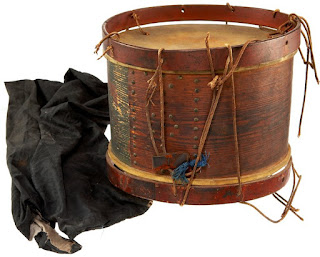 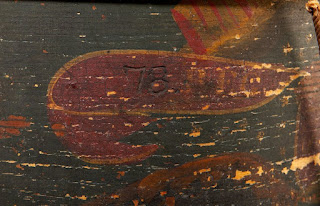 FieldDrums.com Blogmaster's Note: Probably cut-down based on three reasons (the 10" height; the emblazonment is cut-off top and bottom; the tack pattern appears also to have been cut off at the top and the bottom of the shell).