Drum dealer John David O'Neill is back with another beauty on eBay which he describes as: 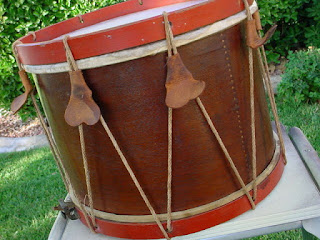 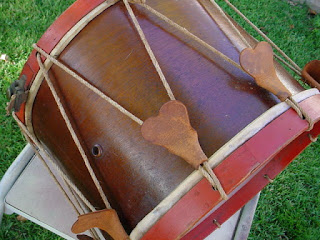 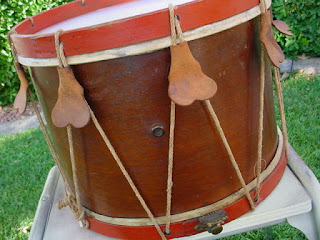 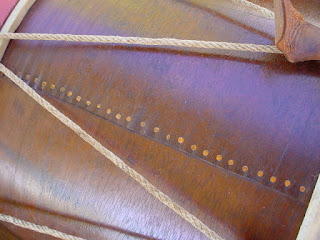 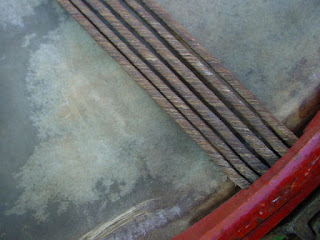 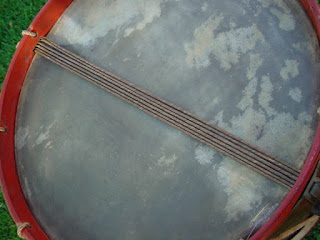 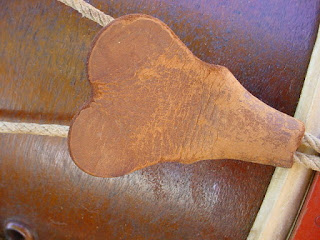 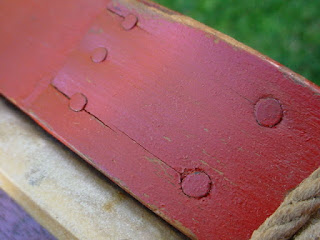 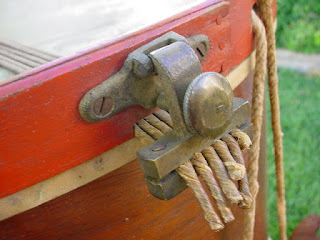 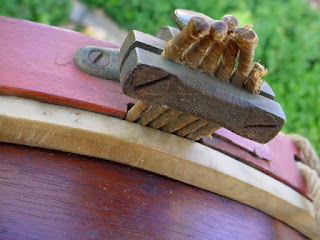 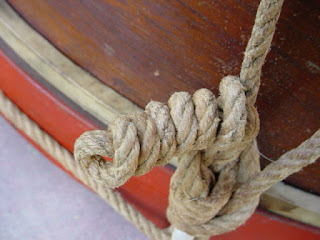 A good friend of mine and fellow drum restoration specialist is known for saying “Every drum has a story, but the drums aren’t talking.”

Having opened up a few thousand drums in my life time, I can attest to the accuracy of that statement in most cases.  Being involved in the fife and drum community I consider myself fortunate to work on many rope tension drums because often, when a drum is worked on, the repairs are accompanied by a signature and a date or even a label from the shop doing the work.  On some occasions I will find names of people that played the drum in the past and sometimes I am lucky enough to get an accompanying date.  In the much larger everyday business of restoration though, that is a rare thing, and finding a drum with that kind of information is often looked at as a home run.  On even rarer occasions, I find a drum that just knocks it out of the park in Grand Slam fashion with more history and provenance than I could have ever hoped for.  This is the story of one of those times.

While continuing what is proving to be a monumental undertaking at the Museum of the Company of Fifers and Drummers last week I pulled a bass drum from its lofty perch where it has sat, quiet and unassuming, as countless people have passed through the museum  over the years.  On the facing head are the words “The Continentals, Colchester Conn” with a large bull in the center of the head.

The Continentals are a fife and drum corps that formed around the turn of the 20th century. On my list the drum was given a number and shown as being a drum from that corps but no maker or any other information was listed.  As I removed the drum from its perch a tack pattern came into view that left little doubt as to what family made that drum.  The big question was which member of that family was responsible for this drum? 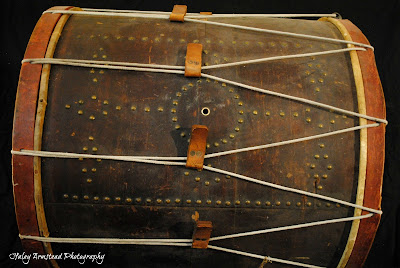 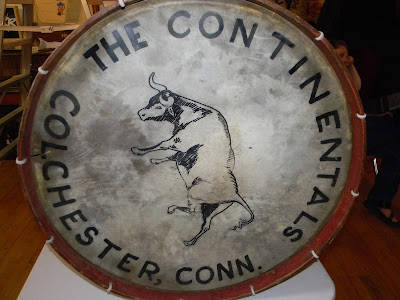 Part of my task in this project is maintaining the drums and performing repairs when needed, but mostly just general upkeep and maintenance.  A close inspection of the drum revealed that there have been numerous repairs made over the last two centuries.  A closer inspection brought to light a problem with the drum that made me cringe a bit.  Somewhere along the line, someone thought that it would be a good idea to nail the flesh hoops and the counter hoops to the shell itself.  (I can feel most of you cringing as you read this just as I did.)

Over time, the nails have started to pull out slightly and had pulled right through the counter hoop in one spot and split the flesh hoop in another.  The decision was easy, I brought the drum back to my shop to remove the nails and make some new ears to replace three that were missing. 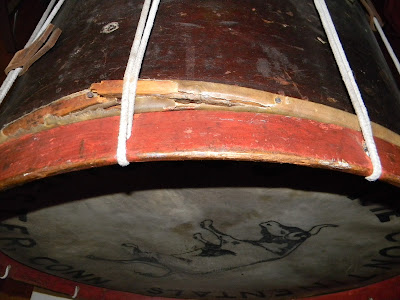 Back at my shop I have a clean bench with a single drum on it.  After more than an hour I had carefully removed the rope from the drum, gently sliding it through each hole.  After another 30 minutes I had successfully removed the eleven 20th century nails from the flesh hoop and counter hoops that were the reason for the drum being in my shop.  As I slowly lifted the front head and hoop the smell of antique wood filled my shop.  It’s an unmistakable and very pleasant smell.  If you have ever walked into an antique shop then you know the smell I’m talking about.

The head came off and the drum's Brown label came into view thereby enabling the drum to be identified.  This drum was made by Benjamin Brown, Jr. and has a date of 1822 and a drum number of 631.  Underneath that label is a label from Odell Chapman that, given the bit of information I have on him, would be from sometime between 1918 and WWII.  There is also a lot of writing in chalk on the inside of the shell, partially covered by some repairs, that I am still trying to decipher. The best that I can make out are “Colchester”, “Company Drum” and “1842” or “1872”.  All of this information would be a great find on the inside of any drum. However, that information pales in comparison to the letter that Is pasted to the inside of the drum near the labels. 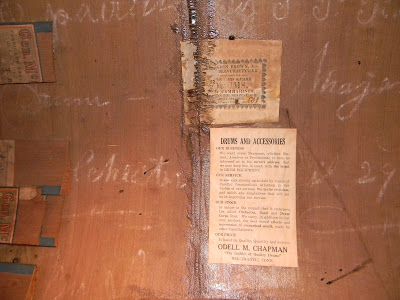 On a pristine piece of 8”x10” paper is a letter dated January 1910 that chronicles the history of the drum, who owned and played it from the time the drum was made until the letter was written in 1910.  Inasmuch as the Company Museum also has the history of the Continentals as well as photographs of the corps with the drum at the turn of the 20th century exist, we have an unbroken chain of custody from about the time the drum was made until present day.  The letter pictured below also contained a few other surprises. 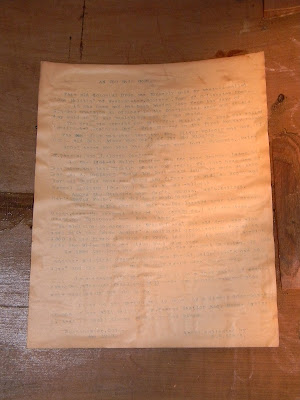 This Old Colonial Drum was formerly used by what was called “ The Militia “ of Westchester, Society, Town of Colchester, Conn.

It was used and has been handed down from the days of General Campion an officer in the Continental Army and in his  day said to be the wealthiest man in the state.

The drum was used when the Hon. Oliver Wolcott was Gov. of Conn. and Benj. Adams was Cap’t of The Old Militia.

Among those who beat the old drum were Lorin W. Loomis, Ralph T. Carrier, and J. Alonso Lamphere.

In the 1864-65 Ralph Carrier was the bass drummer, Later he was also the last Captain of the old order, the last bass drummer was J. A. Lamphier.  Among the last snare drummers were Stephen Day and Darius Stevens.  Among the fifers were William Brown and Samuel Williams (One eyed Sam as he was called.)

Cap’t. Ralph Carrier kept an inn located near the church Green (now the present sight [sic, site] of the parsonage) and the Arms Drums, and equipment were kept there.

In addition to service in “The Militia” the old drum was also used with “The Wide Awakes” a political organization formed in 1860 at the first election of Pres. Lincoln.  It went to Norwich
with the Wideawakes one night this same year.

In 1856 the drum was used during the Freemont Campaign. In 1868 another political organization was formed called the “Boys in Blue” and the old drum was on duty again with these men.

Considering its age the drum is in a good state of preservation although frail and will make the echoes reverberate when used as in the old time.

It is in the parish and is owned by a direct descendant of one of the 901(d) Militia, Mr. Festus Shailor, Esq. whose desire is that it shall always remain in the place.

Above collected by W. E. Adams

It is the sentence regarding the “Wide Awakes” that caught my attention.  It states that the Wide Awakes formed in 1860 and used the drum but then goes on to say that the drum was used by them in Norwich (CT) later that same year.  The statement was something that I found curious as a passing reference so I did a bit of digging and found that the Wide Awakes traveled to Norwich in October of 1860 to participate in a massive gathering of 100,000 members from the Northeastern States to support Abraham Lincoln on his visit to Norwich, a major stop on the campaign trail.  The organization played in a parade in his honor and was part of the event's entertainment.  So now what we have is a drum made by Benjamin Brown, Jr. that was at some point repaired or resold by Odell Chapman, was used by several generals, militias, political organizations, fife and drum corps and was also played for Abraham Lincoln.  This makes for a provenance/pedigree on a drum that would be a truly amazing find for any collector or museum. 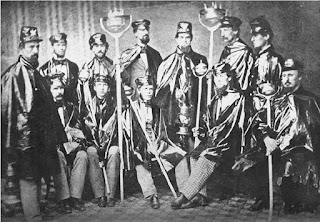 For more information about this drum and the rest of the collection of the Museum of the Company of Fifers and Drummers, please visit the museum in Ivoryton, Connecticut.  And, please consider a membership or tax-deductible donation to the Museum, a 501(c)(3) non-profit organization, to aid in the preservation of this amazing historic collection of drums.