Possible Eli Brown Drum - What Do You Think?

I have a drum in my shop that is perplexing me and so I was hoping that each of you might take a look and give me your opinion. Here is what I know, the drum has an "aftermarket" label with the last date on it of 1937, 100 years after the drum is claimed to have been made by Eli Brown. The drum measures 18 11/16" in diameter and 17.5" in depth, which isn't outside the realm of possibility for a Brown drum. There is an ivory vent grommet which is very similar in style to other Brown vent grommets and the shell is made of tiger maple, which was used on many Brown drums that I have seen.

Having inspected the drum closely and having a couple of other local guys that know quite a bit about Brown drums look at, the initial reaction by everyone is that this is not number "8" a Brown drum for a number of different reasons. The bottom reinforcement ring doesn't quite meet up so there is a small wedge placed in between the two ends so that they match up. The tack design does not look like any other Brown tack design that I have seen to date, I have seen quite a few over the last few years but by no means all of them. The two rows of tacks on the outer edges of the design both have 20 tacks, this is inconsistent with Eli Brown and other Brown tack designs. On classic tack designs on drums of this size, there are between 19 and 22 tacks on the seem side and 13 to 16 on the opposing side, never the same number. The spots where the diamonds in the tacks designs would be (usually with half of the diamonds turned on a 90 degree axis to the rest) are more like ovals and all face the same direction. The tiger maple, while a wood that the Browns used, does not seem like the grain pattern is up to the quality of comparable Brown drums. The scarf seem is about 8.5" wide and comes across the back of the face but is only under about 80% of the tack work but in other drums this size the scarf comes across the back of the entire tack pattern.

This being said, the one thing that is giving me pause on all of this is the size that is hand written on the inside of the drum. The number "8" in the size is in a handwriting that is very much like the numbers written inside of several Brown drums that I have expected. I have included pictures on the numbers inside the drum as well as the numbers from inside of one of Leo Brenan's Eli Brown drums for comparison.

The drum has been refinished, which is common for this area because we have a lot of players here in CT. The back of the tacks look aged as I would expect from a drum of its claimed age and the hoops are definitely not original. Please let me know your thoughts on this when you have a moment, any insight offered would be appreciated. 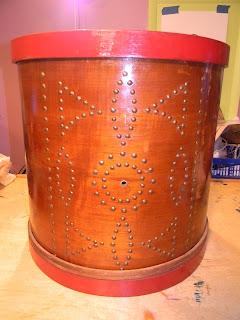 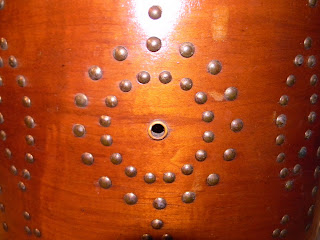 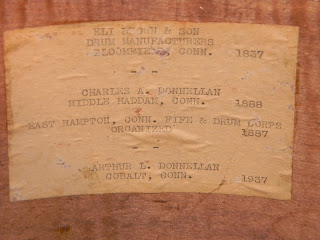 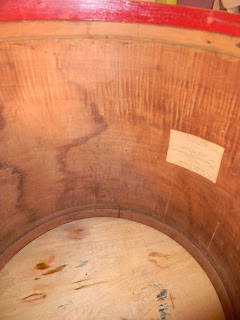 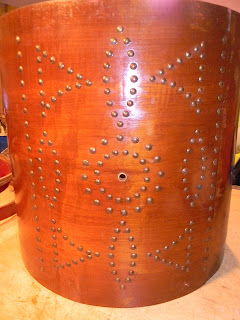 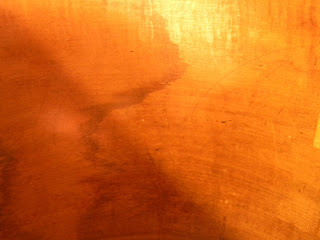 A reader recently wrote with the following information and photos:

I am trying to identify an old drum.  I have George Neumann's book and it shows a picture of a drum almost exactly like mine on page 197.  Neumann dates the drum to 1746.  If this is a militia drum, how rare are they and what could be a ballpark value of it.  Any help would be greatly appreciated. 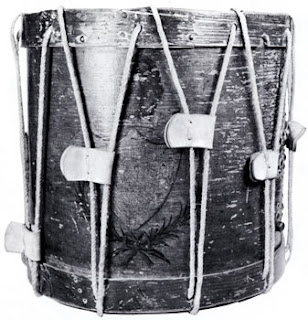 The most important military musical instrument of the 18th century was the snare drum. It not only provided cadence, but also transmitted the basic orders to troops in camp and on the battlefield with specific beating which the soldier was trained to recognize. The drums were fashioned from wood with skin heads, catgut snares, and ropes for tension that required leather pull-down "lugs" to help tighten the heads. When marching, the common step was about 75 per minute. (Modern marching cadence is 128 steps per minute.)  Source: http://shaysrebellion.stcc.edu/shaysapp/artifact.do?shortName=drum 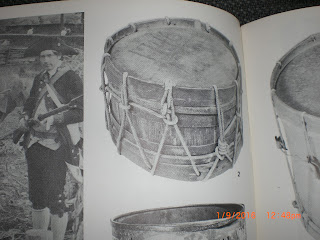 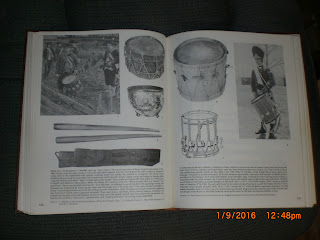 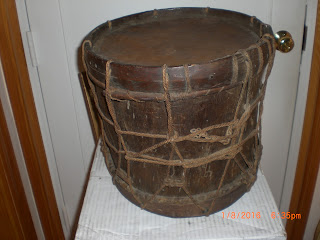 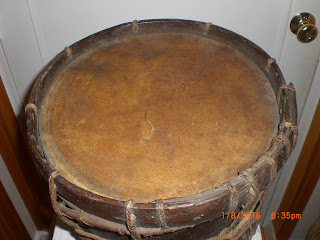 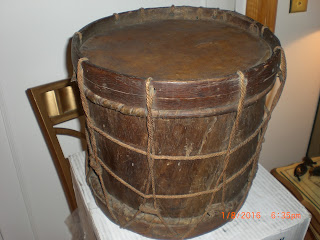 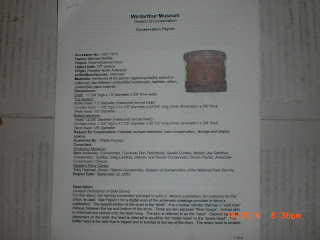 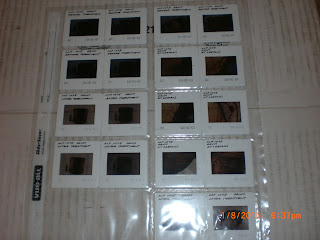 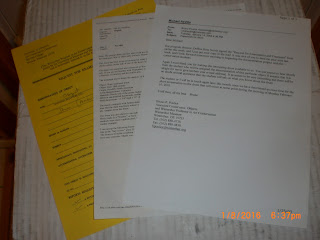