During the Civil War, this brass shell presentation drum sounded the call to arms. It bears the inscription “Henry Galloway”, who was a Field Musician with Company H, 55th Regiment of Massachusetts Volunteer Infantry. A sister regiment to the 54th Massachusetts, famed for its charge at Battery Wagner in Charleston, South Carolina, both were raised in 1863, of free Black citizens. By such service, African-Americans joined the ranks of the Regular Army in 1866, with the organization of the 9th and 10th Cavalry and later the 24th and 25th Infantry. The chasseur-style forage cap displays the 1896-pattern insignia of Company C, 25th Infantry, which earned the proud title "Buffalo Soldiers," while serving on the American frontier. 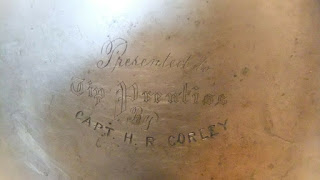