A reader wrote in with photos and information on a drum that might be a Chandler drum from the War of 1812.  Comments, opinion and information are welcome.  Email us at Webmaster@FieldDrums.com. 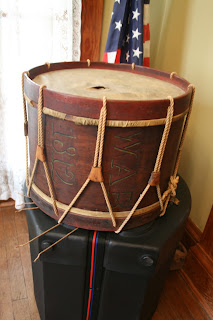 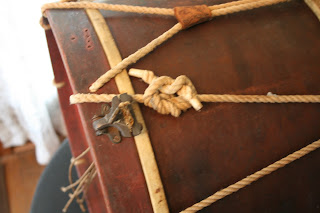 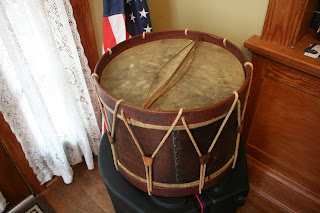 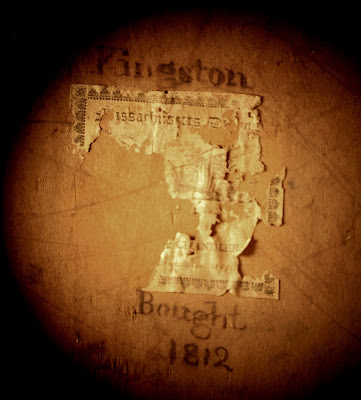 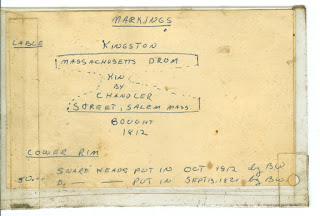 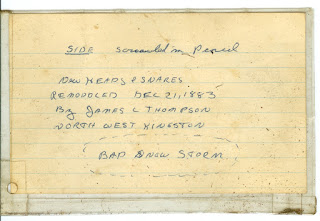 Lee Vinson suggested that I write to you for some information on a drum I own that I acquired, probably in the 1970's, from a car dealer (Bob Roughton Pontiac)  and old gun collector here in Hampton Roads [Virginia].  He bought it for me at a gun show somewhere in New England and I paid him around $250 for the drum and his troubles.

Unfortunately the drum has been cut down.  (OUCH!)  I have shown it to Terry Cornett of Heritage Drums in Huntsville, Alabama who was not convinced of its age, he wanted to restore it to playing condition, and to Lance Pedigo of Colonial Williamsburg.  Lance felt the drum was older than anything in their collection and wanted me to let CW display it.

If you feel it may be worthy of your blog please proceed.  I have, for the sake of time, simply forwarded the small e-mail string between Lee and me.  There are some pictures of the drum at the bottom of the string.  I will send a few more pictures in a separate e-mail.  Any information on this instrument would be very much appreciated.  I have given you all the provenance on it that I have at the moment. 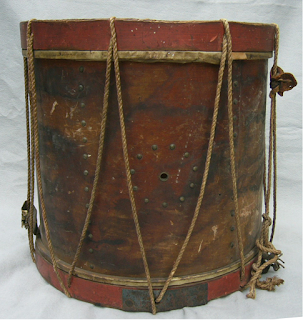 Definitely get in touch with him and let me know what else you come up with!

The Stone xylophones are neat little instruments. I've run across a handful of them. They must have been super popular with theater musicians of New England in the 1910s and 20s.

Your rope drum predates most of what I collect. (And I collect some pretty dusty drums!) I'll point you to two other guys who may be able to help:

Ellis Mirsky (Webmaster@FieldDrums.com) is a lawyer by day and a drum blogger by night. Fielddrums.com is his baby.  He might be interested in sharing your pics on the blog which could generate some leads if he doesn't have any first-hand knowledge himself.

Brian Hill (brisoundperc@yahoo.com) is an avid collector of 18th and 19th century rope drums, especially those with some sort of provenance.  Shoot him an email with pictures and he'll probably have something to say!

Hope this is helpful! Let me know if you uncover any more info on the drum. I'd be interested to know more about it as well.

I own a Stone xylophone as pictured on your blog.  Yours is the only other xylo I have ever seen like it.  You answered a lot of my questions about the instrument.

Also, I have a rope drum, that may date back to the War of 1812.  I'm sending some pictures along in the hope you may able to shed some light on it for me.

I believe this drum was made in the Boston area.

Handwritten markings on the above drum indicate work done on the drum in September and October 1812.  That's pretty compelling information.

Massachusetts Drums
Made and Sold by
Chandler & Peabody
Marlborough Street-Salem 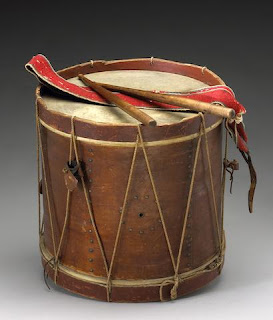 Here is a fully intact "Massachusetts Drums" label from a known War of 1812 drum.  So it appears that the two drums (this one and the Lindberg drum) were made a different times (the label below by Chandler & Peabody on Marlborough Street, Salem, Massachusetts). 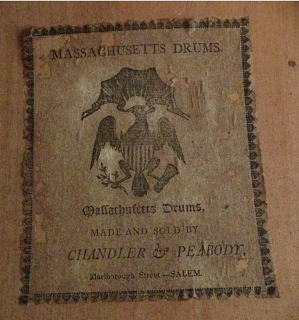 Summary : A reader selling a Brown drum wrote for information.  There followed some lively discussion on FB and correspondence with this blo...