The Battle of New Market was fought on May 15, 1864, in Virginia during the Valley Campaigns of 1864 in the American Civil War.  A makeshift Confederate army of 4,100 men, which included cadets from the Virginia Military Institute (VMI), forced Union Major General Franz Sigel and his army out of the Shenandoah Valley. The cadets were integral to the Confederate victory at New Market. Source: https://en.wikipedia.org/wiki/Battle_of_New_Market.  Photos courtesy of Ron Maness. 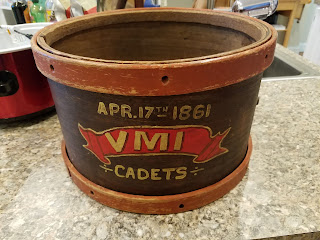 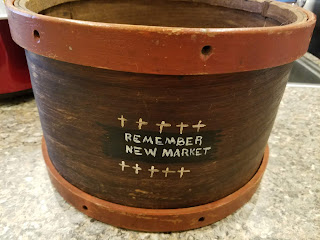 VMI's 10 cadet fatalities are remembered on the drum 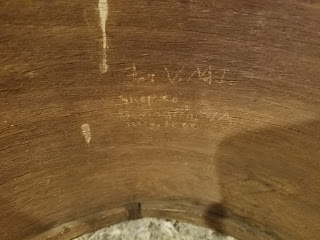 Thank you for your response. Attached are photos of the drum.

Obviously, it is ID'd to VMI. The drum is small: 8.625" deep and 14" in diameter measured outside the rims. It appears unaltered. The lower edge of the drum is carved out at two opposing points to facilitate the snare.

Written in pencil inside the drum (and difficult to photograph) is what appears to read "Y. Lilley Maker 1860". I'm not sure about the Lilley name. It's the best I can make out.

The drum has come out of a very old collection and everything else in it is righteous. The drum and its markings appear good, but I am not a drum expert.

With the drum are remnants of the rope and two leather tighteners (they are small and in poor shape).

Your thoughts would be appreciated.

Hello Ron,
I will try, but I will forward the images to several others who may have more expertise in identification. In general, if there is any kind of evidence on the drum, such as pencil or ink inscriptions, the highest value could be in "as found" condition. If there are no historically relevant indications and the instrument is sound (or could be made sound) then restoration to playing condition could be warranted.

If I sent you photos of what presents itself as an 1860 production rope tensioned drum,  could you help authenticate it? The item needs restoration, if it is a real drum. I suppose you might be interested in providing these services?