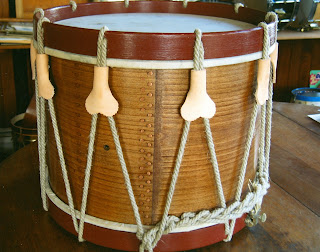 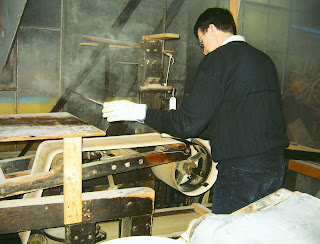 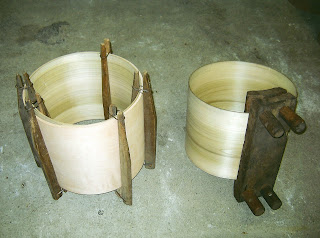 Granville, Massachusetts - Jay Jones, president of Noble & Cooley and great-great-great grandson of one of its founders, James P. Cooley, said that the company plans to reissue its Civil War contract field snare drum conforming to period specifications using the same, gigs, fixtures and forms used during the Civil War. Noble & Cooley would be the only company to ever do so. Jones declined to discuss the price point but it is expected to be competitive.

This will not be a reproduction Civil War drum but something completely different. It will be the same drum, made to the same specifications, using the same material and made in the same factory using the same machines as when this line of drums was originally manufactured for the U.S. Army.

The reissued drum will measure 12"x16" (16-3/4" to the outside of the counterhoops) with red-painted oak counterhoops mounted on a single-ply tulip shell. The snare mechanism will be the same bronze/brass design used by Noble & Cooley for its Civil War contract drums, including a leather butt plate securing 8 gut snares. The drums are planned to be unpainted, but stained walnut and coated with shellac. The seams will be secured by copper tacks as were the first issues of this line. The drums will be equipped with calf skin heads and a rope loop for carrying (pre-D-ring).

The ropes will be Irish linen although Jones recalled his grandfather telling him that the originals used 7-strand Italian hemp which the company is currently having difficulty locating. (From 1937 until the late 1960s the United States government recognized that industrial hemp and marijuana were two distinct varieties of the cannabis plant. After the Controlled Substances Act (CSA), hemp was no longer recognized as being distinct from marijuana. That may account for the difficulty in securing hemp. History of Hemp. See also, Hemp, THE ENCLCLOPAEDIA BRITANNICA, 1856: "The Italian hemp is very fine, that variety called garden-hemp being the longest of any kind; its superiority is supposed to be the result of spade culture in very suitable soil. It is also as white and soft as the finest white Russian.")

A prototype of the re-issued line is already in the field and in use by the 77th New York Regimental Balladeers of Windham, New York, a Civil War reenactor singing group. The drum is being used in connection with efforts to raise funds for a special celebratory Historic Heritage event featuring musical performers at the Noble & Cooley Center for Historic Preservation.

Separately, John Quinn, spokesperson for the Balladeers, who is working with Noble & Cooley to produce the event, mentioned that production of 50 sesquicentennial drums is underway in Granville. He also confirmed that the prototype drum can be seen sitting on the stage in the video below. Quinn said that the prototype is currently on exhibit at the Zadock Pratt Museum in Prattsville, New York and that the drum will go on tour with the Balladeers beginning with the group's September 18 appearance at the Saratoga Springs Civil War Encampment at Congress Park, Saratoga Springs, New York. The drum will be raffled off by the Balladeers who, while on tour, are raising funds for the Historic Heritage event in Granville.